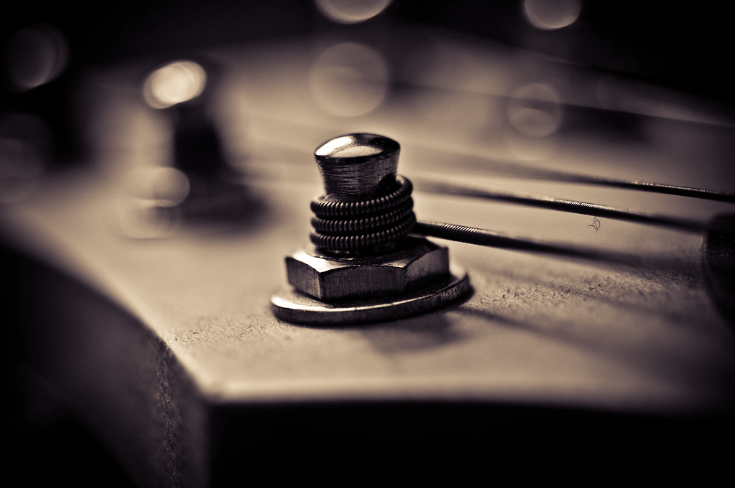 Did you know there are over TEN components of a tuning machine?

What are the parts of a tuning machine? The tuning machine is made from tuning head, cylinder, tuning posts, bore hole, pinion gear, worm drive, bushing, button, rubber casing and lock-in screw to make it function.

In this article, I will discuss these in more detail.

The button is also known to be called the tuning head and the grip piece. It is the part of the machine head that your hands grip to loosen or tighten the string.

When you are putting on new string, you will turn the tuning grip piece clock-wise to tighten it. If you keep twisting it in this direction, you will eventually increase the tension of the strings and reduce the slack.

If you want to change and remove your strings then you will turn the tuning grip piece anti-clockwise.

There are many variations of the button. This includes the colour and the material. They can come in many colours as you can imagine but the modern ones are mainly plated in gold or silver. They can also come in two main materials being steel alloy or plastic.

The cylinder is the part that holds the strings and is where the strings coil round repeatedly.

You have two types of cylinders the vintage tuners Some cylinders are designed better than others. The cylinder has to be designed to hold the string securely and are slanted to push the strings to the center of the piece.

This is because the strings want to be reeled as close together as possible to avoid string slippage.

String slippage is impossible to avoid, however some designs do work better than others do.

Tuning posts is an important component of your machine and they are generally TWO types of these. The Tuning posts usually vary depending whether you are using the vintage or modern style tuning machinehead.

For example, the original Kluson branded tuning machine (typically used on the Fender Stratocasters) have a slot in the top of the post (being the cylinder) with a hole running down the center of the shaft where the string is then placed.

Whereas, the sealed machine post has a hole in the post (being the cylinder) that threads the string through and then over the post repeatedly until the string coils over itself. These require a bit of skill to re-string as cutting the unused string can sometimes be messy.

Overall, the slotted vintage style is still popular today and many players prefer the design for their vintage aesthetics in addition they are also easier to re-string. They also have the added bonus that the trimmed end of the string being hidden and does not stick out. Whereas, you may catch your fingers and tear up the inside of your gig bag with the sealed machine.

The bore hole refers to the six large holes in the headstock which allow the tuning posts to pass through.

Generally, every guitar will have SIX bore holes and bass guitars will have FOUR bore holes. This is to accommodate for holding each string in place.

The bore hole is dependent on the amount of string you have. So, if you have a seven-string guitar then your will have seven bore holes. The same goes for a five-string bass etc…

The bore hole’s size can vary depending if you are using a traditional or sealed machine and the type of bushings used to hold the machinehead in place from the font of the headstock.

The sealed machine usually have a 10mm threaded bushing with surrounded washer and held to the headstock by a single screw piece. Whereas, the traditional machines will fit into ¼-inch holes on the headstock.

The pinion gear is the gear wheel that attaches to the post and the worm drive.

When tuning your guitar the pinion gear turns clockwise and anti-clockwise depending on the direction you twist the tuning head / grip piece.

The pinion gear fixes onto the worm drive that is responsible for turning the cylinder, which alters the tension of the guitar string.

The worm drive is like a screw mechanism that attaches between the pinion gear and tuning head / grip piece.

The contact between the worm drive and the pinion gear gives a ratio specification. This is determined by the gearing ratio (basically the size of the gears). The specification of the gears ratio determine how much movement is made when you turn the Tuning Head / Grip Piece.

The higher the ratio, the more turns of the tuning head are needed. Those that provide less movement are actually better as you can find the correct notes more accurately.

Moreover, there are TWO types of bushings being the push-in / press-in and bolt threaded bushings.

However, because of the two different size bushings can cause a problem if you want to revert to the traditional tuning machine. But, there is good news because it is common to find conversion bushings to make the bore hole to its original size.

The fixtures are referred to the screw or indexing pin.

On most guitars, a screw is used to tightly hold the machine in place so it does not wobble and fastens the machine to the headstock.

Whilst the Indexing pins are less common they consist of a pin instead of a screw to hold the machine in place. They have their advantages of not being fixed to the guitar because screws tend to thread over time. But they can often fall out and get damaged when changing the strings as they are held in place by the tension of the guitar strings.

Rubber casing are only found on sealed machines, they are used to prevent dirt, and moisture getting inside the gear system as it can weakening it over time.

The rubber casing also is used as it keeps the gear lubricated. A well lubricated gear is smooth when adjusting the string.

10. Lock-in Screw (guitars with a Whammy)

The lock-in screw (locking machine) is an attachment on the machinehead that is mainly found on guitars with a whammy (however this is not always the case).

The lock-in screw can increase the tuning stability as it locks traps the strings. By doing so it prevents the strings from slipper over time.

This works by a wheel mechanism on the back of the tuner.  When a string is threaded through the cylinder on the post, the rear wheel is turned clockwise to effectively ‘pinch’ the string and lock it in position.

Even though it decreases the flexibility of your tuning, lock-in screw are becoming more popular especially guitar with a whammy or Floyd rose.

In this article, we have discussed every component that makes up the common tuning machinehead, were we discussed in detail about…

I hope you enjoyed the post and please leave comment on anything I did not explain as well as I should have.

Thanks and have a wonderful day J

9 thoughts on “All Parts Of A Tuning Machine Explained”